Justin Trudeau’s federal Liberal government is preparing a strikebreaking law behind the scenes to criminalize looming job action by over 1,100 dockworkers at the Port of Montreal. The news comes after longshoremen, foremen, and maintenance workers voted by an overwhelming 99.7 percent last Sunday to reject the latest concessions-filled contract offer from the Maritime Employers Association (MEA). The workers have been without a contract since December 2018.

According to the Montreal daily La presse, Trudeau’s cabinet was presented with the draft of an “emergency” back-to-work bill when it met Monday, just hours after the workers’ decisive rejection of what the employers have called their “final offer.” 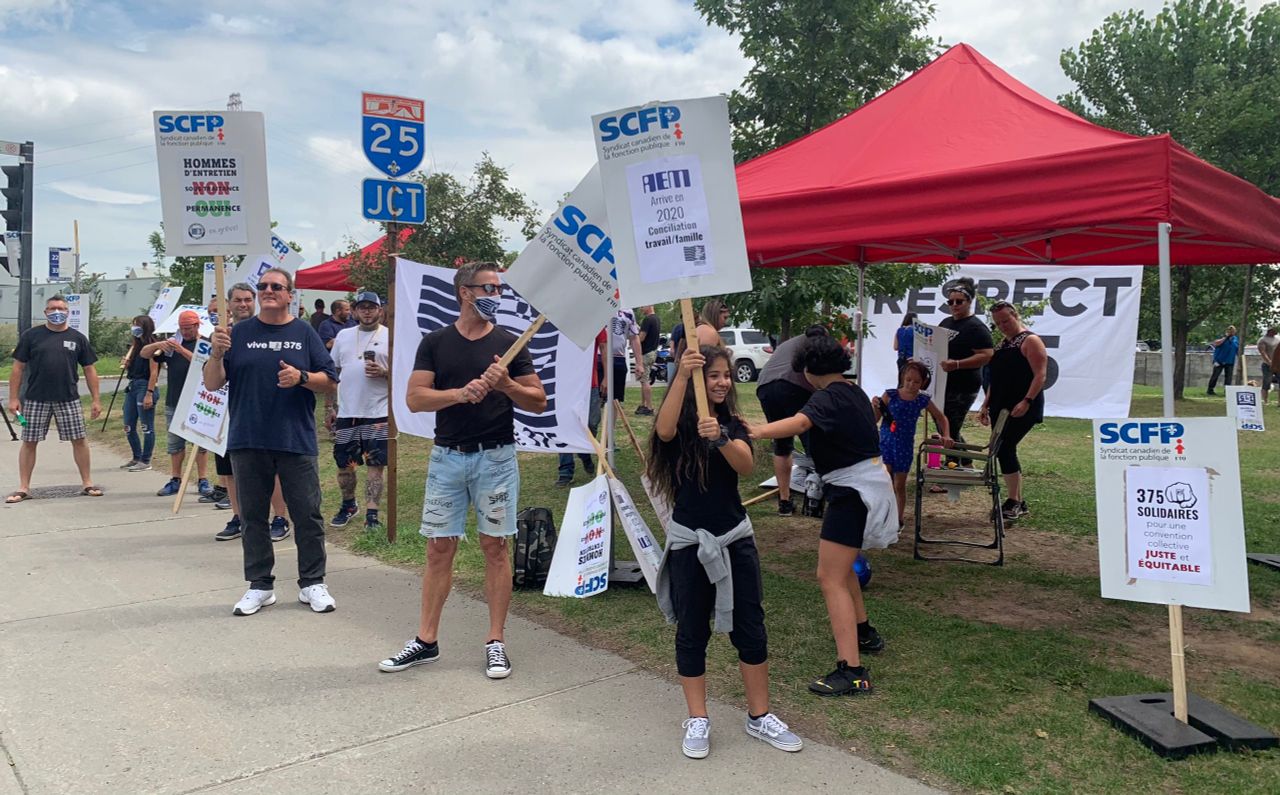 The advanced preparations to outlaw a Montreal dockers’ strike even before its launch underscores the extreme nervousness with which the federal government and the ruling elites in Quebec and across Canada are following the dispute. They fear that the workers, who are represented by the Canadian Union of Public Employees (CUPE), could significantly disrupt economic activity if they strike. Canada’s second-largest port, the Port of Montreal is responsible for handling approximately £100 billion worth of goods each year.

More fundamentally, the concern of the government and corporate Canada is that the dock workers’ militant struggle for improved job security, an end to speed-up, and better work schedules could trigger a broader working class upsurge. There is rising popular anger over the ruling elite’s ruinous mishandling of the COVID-19 pandemic, which has killed more than 22,500 people across Canada, eliminated hundreds of thousands of jobs, and further exacerbated social inequality. The dockworkers have been waging a determined struggle for almost two-and-a-half years to secure a contract in the face of continuous provocations by the two major shipping operators, Termont Montreal and Montreal Gateway Terminal.

They thrice voted overwhelming for strike action between late 2018 and the summer of 2020. But no work stoppage occurred until last July, due a combination of MEA interference, legal hoops imposed by the Canada Industrial Relations Board, and CUPE foot-dragging. A series of brief work stoppages beginning in early July culminated in a 12-day strike that was ultimately sabotaged by CUPE in mid-August.

The general work stoppage was prompted by management’s unilateral decision to slash weekend and night shift wages by 50 percent, and reroute some cargo shipments to other ports, including Halifax and New York. As part of its sellout of the strike, which demonstrated the social power of the dockworkers by bringing supply chains to a grinding halt, CUPE agreed to a seven-month “truce” with the MEA during which time no strikes or job actions could occur. This truce period came to an end on Sunday.

The Trudeau government’s plans to pre-emptively criminalize a strike at the Port of Montreal only goes to show that CUPE’s demobilization of the dockworkers has emboldened the ruling elite, and that when essential big business interests are at stake the supposedly “progressive,” union-supported Liberal government will ruthlessly enforce them.

At the centre of the current dispute is the MEA’s push for regressive changes to the current gruelling work-regime, which compels dockers to work 19 out of 21 days. It is demanding a three-fold increase in the amount of work performed on weekend shifts, and the elimination of jobs, even as the pace of work increases. The conditions of brutal exploitation at the Port of Montreal are enforced by a ruthless disciplinary regime.

Since the last contract was negotiated in 2013, workers who have sought to resist the port operators’ work-regime have been the subject to more than 30 firings and more than 1,000 days of work suspensions. Underscoring that the conflict goes far beyond Montreal’s docks, the Trudeau government’s preparation of an anti-strike law comes in response to a months-long campaign by business lobby groups from across the country demanding the state suppression of the dockers’ struggle. Quebec’s main employer association, the Conseil du patronat, and the Canadian Federation of Independent Business, Quebec Manufacturers and Exporters Association, and Federation of Quebec Chambers of Commerce have all weighed in with calls for the government to settle the dispute, i.e., adopt back-to-work legislation so the employers’ demands can be imposed.

On March 10, sixteen business groups, including the Canadian Vehicle Manufacturers Association and Canadian Produce Marketing Association, sent a letter to federal Labour Minister Filomena Tassi and Minister of Transport Omar Alghabra calling on the Trudeau government to use “all tools at its disposal” to prevent a strike and bring about an “agreement.” Business groups complained that last summer’s work stoppages cost wholesalers up to £600 million in lost revenue. They have also sought to slander the dockworkers, accusing them of endangering medical supplies required for fighting COVID-19, when it is management’s intransigence and provocative demands that have led to the dispute in the first place.

It is now all too clear that CUPE’s sellout of last summer’s strike has been used by the federal government and employers to make preparations to smash a potential strike by dockworkers. In addition to the government’s readying of back-to-work legislation, companies began redirecting shipments to other ports over two weeks ago in anticipation of worker unrest. According to the Globe and Mail, dozens of companies across Ontario and Quebec are involved in the operation. “It’s a better bet for them than the risk of having containers sitting paralyzed on the dock in the event of a stoppage,” commented Sophie Roux, vice president of public affairs at the Montreal Port Authority.

The only way dockworkers can resist this unified ruling class offensive is by making their struggle the spearhead of a working class counter offensive for decent-paying, secure jobs, safe working conditions amid the pandemic, and an end to back-breaking work schedules and intimidation by management. Such a struggle would meet with enthusiastic support from workers across the country, who all confront dangerous conditions due to the ruling elite’s reckless reopening of the economy and refusal to adopt public health measures that get in the way of the operations of big business. The greatest hurdle to the waging of such a struggle is CUPE, which has done everything throughout the long-running contract dispute to confine the struggle to the anti-worker collective bargaining framework and prevent a strike from developing into an open rebellion against the incessant drive for fatter corporate profits.

After Sunday’s near unanimous vote against the MEA’s offer, CUPE refused to name a strike date, disingenuously asserting that workers had not asked to strike.

Even now, CUPE is maintaining radio silence on the threat of back-to-work legislation, while proclaiming that it is possible to achieve a deal through negotiations. The union has indicated its willingness to submit to mediation, which long experience shows is a mechanism whereby the federal government inserts a pro-employer individual into the negotiations to press for a settlement on management’s terms. A no less duplicitous role is being played by the federal New Democrats.

Alexandre Boulerice, the NDP’s sole Quebec MP and deputy leader, told La presse that the NDP would oppose back-to-work legislation “in any form” and accused the Liberal government of “betraying” its professed friendly ties with the unions. Boulerice’s comments are political theatre. They come just weeks after NDP leader Jagmeet Singh announced that his party, which has repeatedly provided the minority Liberal government with the votes it needs to survive in office, will continue to prop up the government for the duration of the pandemic.

If the NDP chooses to oppose a bill that legally compels dockers to return to work, this will only be because they know full well that the Conservatives and Bloc Quebecois will provide the government with the majority to rapidly adopt its strikebreaking law. Eager to maintain its public image as a worker-friendly “progressive” government, and retain its close corporatist partnership with the unions, the Trudeau government publicly insists it continues to have “faith” in the collective bargaining process. Meanwhile, behind the scenes it is using what was obviously a deliberate “leak” of its plans to outlaw a strike to cajole CUPE into reaching a “negotiated” settlement with the MEA that accepts most if not all of the employers’ demands.

The CUPE leadership has repeatedly demonstrated its readiness to sabotage the struggle of dockworkers. Its fear is that if it acts too openly as the enforcer of concessions contracts, it could have a rank-and-file rebellion on its hands that it would struggle to control. This week’s developments underscore that the Trudeau government supports collective bargaining so long as it results in the demands of big business being imposed on working people with the complicity of the corporatist trade unions.

When this fails due to the determined opposition of rank-and-file workers, it stands ready, no less so than its Conservative rivals, to use savage state repression to crush worker resistance. To conduct a struggle against this ruling class conspiracy and achieve their just demands, workers at the Port of Montreal must prepare for a political confrontation with the entire state apparatus. This must include defiance of any Trudeau government back-to-work law–action whose success will depend on mobilizing the social power of the entire working class.

The first step in such a struggle is for dockworkers to establish a rank-and-file strike committee to seize control of their struggle from the CUPE union bureaucrats and make it the spearhead of a working class counter-offensive against austerity, the ruling elite’s homicidal back-to-work campaign, and its criminalization of workers’ struggles.

Such action would win broad support, including from logistics and delivery workers, postal workers, auto and other industrial workers, and teachers, who all confront a no less aggressive offensive on their jobs and working conditions in the midst of the pandemic. 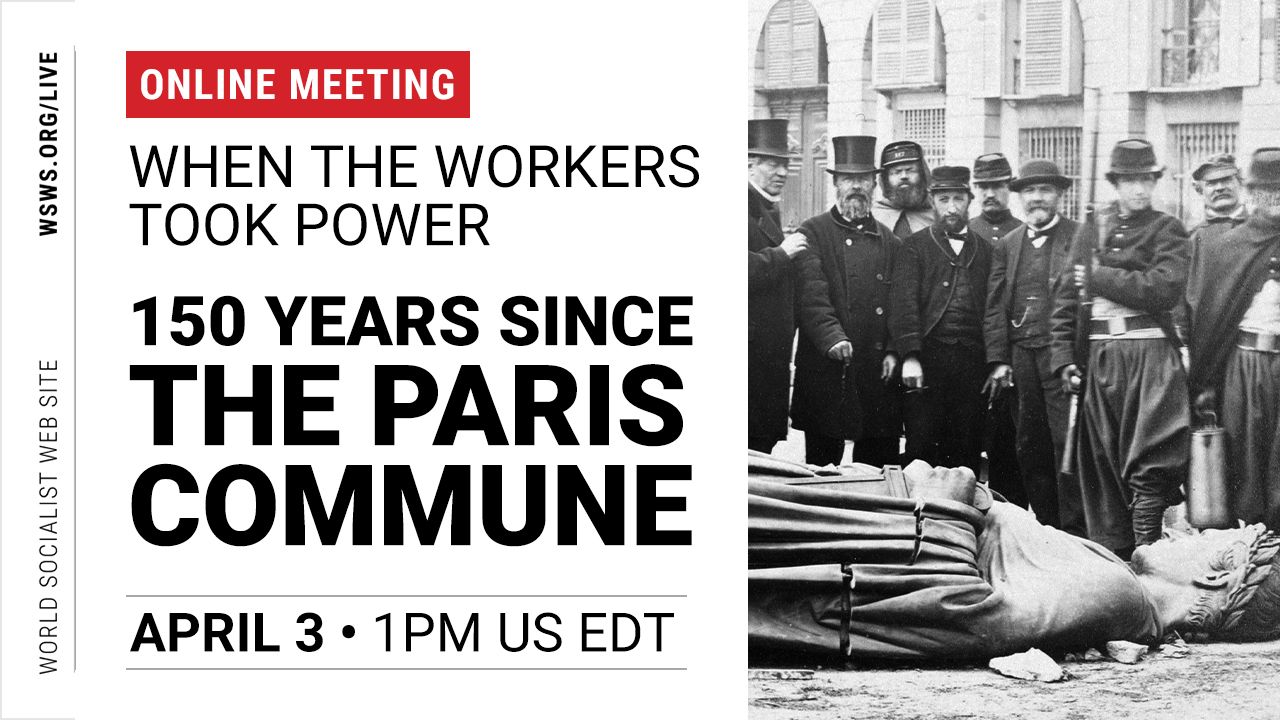 Join us for a discussion of the first time in history that the working class took power.